Notes on the practice of figure drawing. 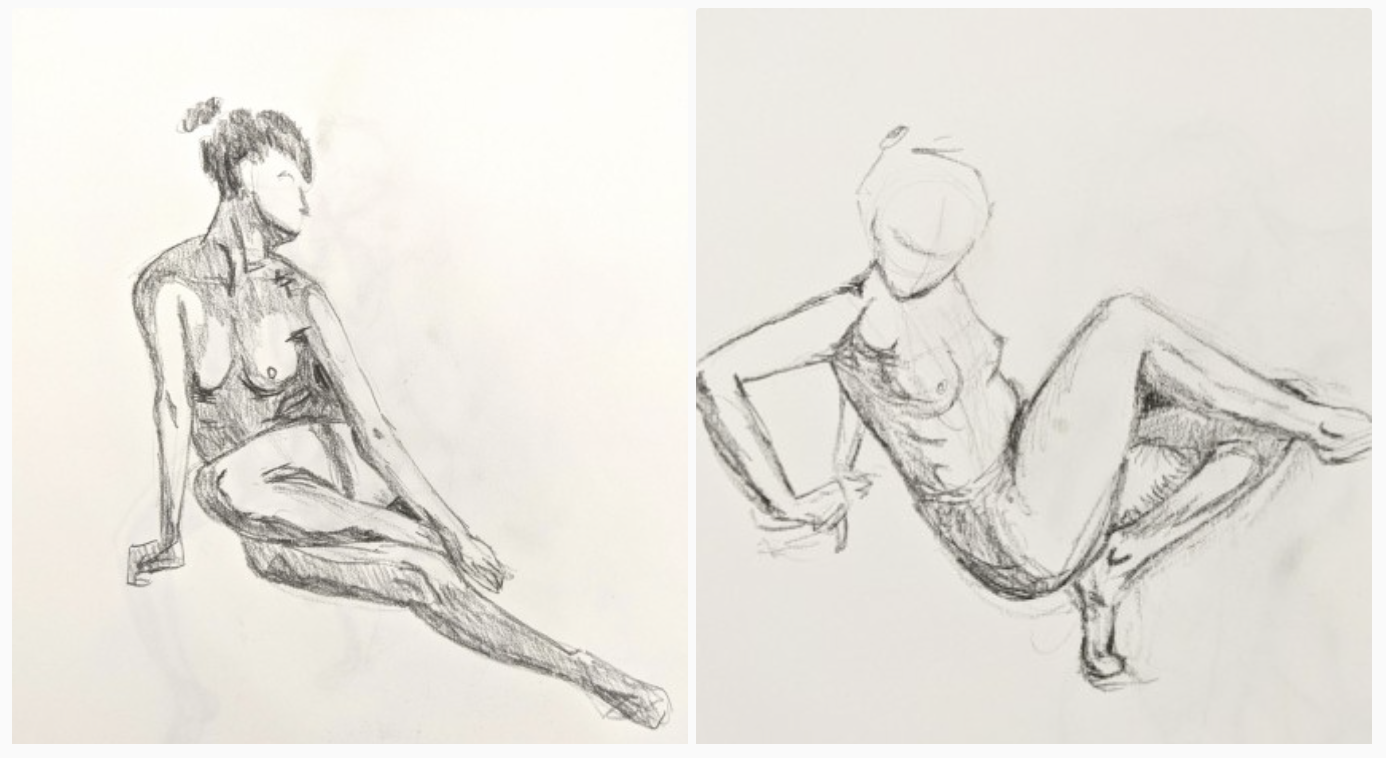 “I remember standing on a street corner with the black painter Beauford Delaney down in the Village waiting for the light to change, and he pointed down and said, “Look.” I looked and all I saw was the water. And he said, “Look again,” which I did, and I saw oil on the water and the city reflected in the puddle. It was a great revelation to me. I can’t explain it. He taught me how to see, and how to trust what I saw. Painters have often taught writers how to see. And once you’ve had that experience, you see differently.”

I’ve been practicing figure drawing using Michela’s charcoal pencils and extra sketch book, with the sketchbook that she bought for me on back order.

A beginner figure drawing regiment consists of equal parts three things: face and head drawing, full figure drawing, and quick sketch which means sketching a subject in less than 5 minutes to capture the “gesture.” The many available online instructional videos use words like gesture and rhythm to mean vague unexplainable things about the overall shape of the subject and the ways the lines you draw are related to each other. As unexplainable as these things are, I feel like I am gradually getting a sense of what they mean.

I use a circle (cranium) and wedge (jaw) for the head, and then use the Reilly method to draw the torso: the main line of action (spine to groin), a horizontal line for the top of the shoulders, then lines from each shoulder to the groin, and then from the neck to the hips, all the while looking back and forth between my work and the reference to get the proportions correct, which is especially important when drawing humans. I draw an oval for the volume of the ribcage, and another oval for the volume of the pelvic bowl. Then I draw CSI curves (lines which are either C, S, or I shaped) for the insides and outsides of the arms and legs, and that gives me the main gesture of the subject and I can fill in details and contour from there. In my first week my shading was mostly based on the value (darkness) of the general area in the reference, but now I try to look for specific shadow shapes on the body, which one instructional video described as being like clusters of islands. I enjoy 5 minute quick sketch the most, but as I’ve gotten more ambitious I will sometimes turn off the timer and just continue until I’ve done the whole body (the head for now remains a blank oval with a line for the eyes). 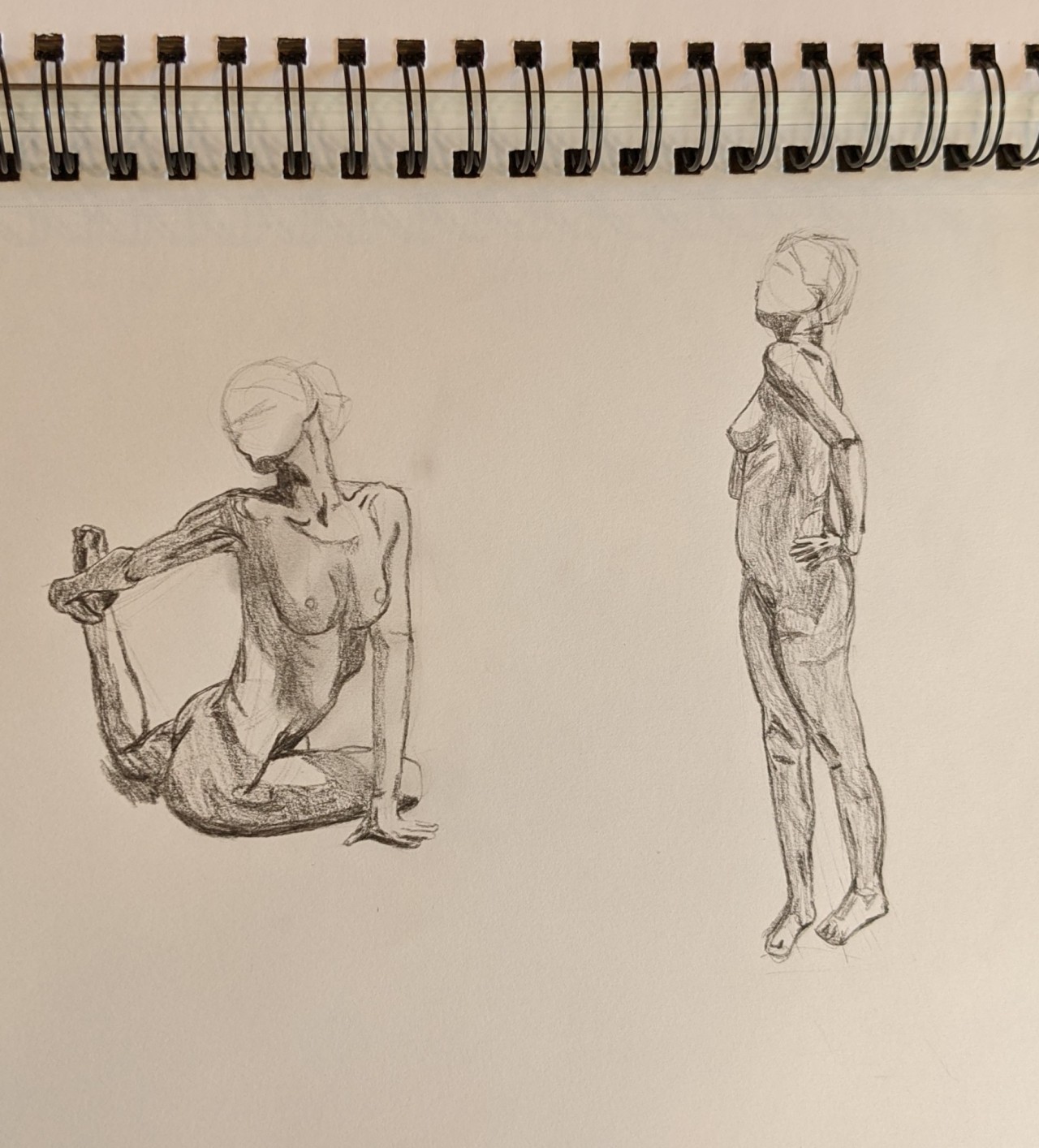 Michela got us a figure drawing reference book by Andrew Loomis which is full of diagrams. Diagrams on how to draw in perspective, from imagination, and from models, and hand drawn diagrams of all the bones and muscles in the human body. Andrew Loomis is also known for creating the Loomis head method. The essence of his method is that a head is a sphere with two flat side-planes chopped off, the bottom quarter of which is the ear and where the jaw starts, plus the jaw volume which is a sort of rounded wedge. I’m able to draw Loomis heads in most directions but am still quite bad at adding in the detailed facial features. But figure drawing as a hobby is special to me because it’s one of the only hobbies I’ve picked up despite not being naturally very good at it. Despite my middling consistency, and despite really hating some of the drawings I produce and wanting nobody to see them, I still find drawing invigorating and enjoyable.

In the middle of the day when we take walks Michela sees things I don’t, like decoration through second story apartment windows, license plates on vehicles and clothing on bikers passing by on the street, and dogs, and she wonders things like what kind of tree is that, whose names are etched into the side of this building, and where is the cat today. On weekends when we paint I’m impressed by her ability to put red and blue in a cup of coffee, and pink and brown in a white wicker basket, and just generally how she can use all the wrong colors with aplomb. I think she probably sees things like James Baldwin talked about. 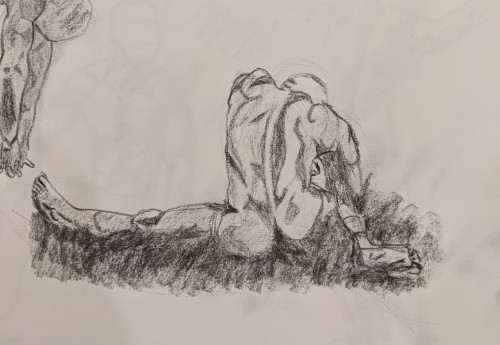 One diagram in the Loomis book shows furrows all the way down the back. There is a furrow in the middle of the neck. Furrows on the waist. Furrows beneath the shoulder blades, and in the skin of the elbow. When I close my eyes before going to sleep I can picture furrows. They’re not part of any larger body part that I can make out, like the crook of an arm, or where the calf meets the thigh on a kneeling figure, they’re just sort of lines and tone, repeated curves and tilted shapes. They could be sections of hieroglyphics even, or Chinese calligraphy. They are like the wrinkles on my thumb, which alternate from the left and the right and harden when they dry out, or the even more imperceptible furrows down the back of my hand which form little cells lined up like bricks, packed together loosely like the medium grain of the paper in my sketch book.